On September 26th, the one-year anniversary of the forced disappearance of the 43 Ayotzinapa students from the Raúl Isidro Burgos Rural Teachers' College in Iguala, Guerrero, Mexico, activists and colleagues are holding a series of special events beginning on Friday, September 25th through Sunday, September 27th, as fits this somber occasion.

According to independent investigators from GIEI (Grupo Interdisciplinar de Expertos Independientes de la CIDH, Comisión Interamericana de Derechos Humanos de la OEA – Organización de Estados Americanos), it has been proven that it was scientifically impossible to have burned the 43 students in the Colula garbage dump as the government insists; therefore, it seems that if the state did not perpetrate criminal activities, then at least drug cartels were in collusion with Mexico's corrupt government. To prove such subterfuge, Mexico has not authorized experts to question their army, and access to several key security areas have been blocked by the government's Minister of Defense.

Thus, anger and grief among the parents is unbearable, all over again, and human rights activists are incensed and working hard to reverse what seems to be the government's toxic inertia.

In the Dallas/Fort Worth region, activists have met at the Puente Blanco — the Continental Avenue Bridge in Dallas — every month since this painful event occurred. But on this anniversary date, events are planned for the entire weekend not only to bring awareness to everyone of all languages in the metroplex concerning the horrid circumstances surrounding Mexico, but also to show the culture and beauty of the region that is so predominant, which should likewise be celebrated.

To begin this solemn ocassion, on the eve of this anniversary date, Friday, September 25th at 7pm, at UT Arlington School of Architecture, 601 W. Nedderman Drive, Room 205, the Center for Mexican American Studies (CMAS) with the help of Adjunct Justice, will show the documentary film, Ayotzinapa: Crónica de un crimen de estado/Chronicle of a State Crime, with subtitles in English. This powerful film, by renowned director Xavier Robles, explores the still unsolved case of these 43 students. It weaves a compelling narrative through a tapestry of witnesses, experts, student survivors, and parents of the massacred in Guerrero.


Posted by Ana M. Fores Tamayo/Adjunct Justice at 8:49 AM No comments:

I met Paul Zoltan, immigration lawyer and human being extraordinaire, when I wanted to work a little closer to home helping refugees. Although going to South Texas to help the mothers and children crossing the border is extremely rewarding — and I know it helped both refugees and Sacred Heart Respite Center, which continues to do great work — I needed a place where I could volunteer my time and services closer to home.


Paul Zoltan has mounted an incredible operation, together with Catholic Charities of Dallas.

But as all operations go, he needs much help.

If you are a lawyer, a writer, a translator, a teacher, a good samaritan — and you can offer your assistance — please contact me to help out at the next pro se asylum clinic in February at Catholic Charities of Dallas. We hold these immigration clinics every two months now, so we are in constant need of volunteers!


Read more »
Posted by Ana M. Fores Tamayo/Adjunct Justice at 8:22 AM No comments:

Just in Time for MLA in Austin...

Just in time for the MLA Conference in Austin from January 7th through January 10th, I am adding these articles, trailers, and information about Ayotzinapa, cronica de un crimen de estado, so that if you happen to go to Austin for the conference, or if you live nearby, you can check out and see this impactful documentary in Spanish with English subtitles at Monkey Wrench Books on Friday, January 8th, at 7:30PM. 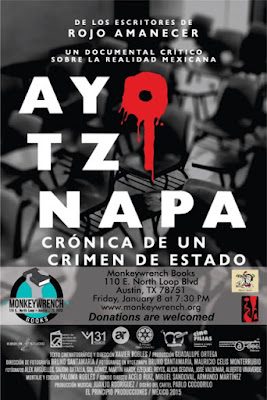 Thank you once again to my intrepid colleague Vanessa Vaile for putting this list of articles together. And if you are a filmmaker, do not overlook the STUFF Film Festival links: Robert & Mariella Perez will be reviewing new films now for their next festival Mundo de Sueños in September and then the 2016 STUFF film festival a few months after that!

Posted by Ana M. Fores Tamayo/Adjunct Justice at 7:23 AM No comments: