I Do Not Exist.... UNDOCUMENTED!


I went to see the play Deferred Action this past weekend, a wonderful production about the trials and tribulations of the DACA movement, and the real lives it touches.

I hope the play catches on and begins to make its rounds in other cities: it is defnitely worth seeing.


In any case, this play depicts the ongoing conflict brought on by the onslaught of deportation, and how DACA and the DREAM Act are trying to counter deportation's horrible effects. Millions of young people who were brought to the United States as children are now finding themselves in limbo, or their parents are in the crosshairs. Although the US government wants to deny these young people the only home they have ever known — the United States — they cannot call their home country their own either, because in most cases, they do not even remember it.


Read more »
Posted by Ana M. Fores Tamayo/Adjunct Justice at 8:48 AM No comments:

The Refugee Problem under USA's Rug in a Future Without Poverty

I have been too busy in the day-to-day to write anything much these days, but I did want to post my talk at the recent two-day conference presented by Future Without Poverty and dedicated to Reducing Global Poverty Through Grassroots Sustainable Actions. 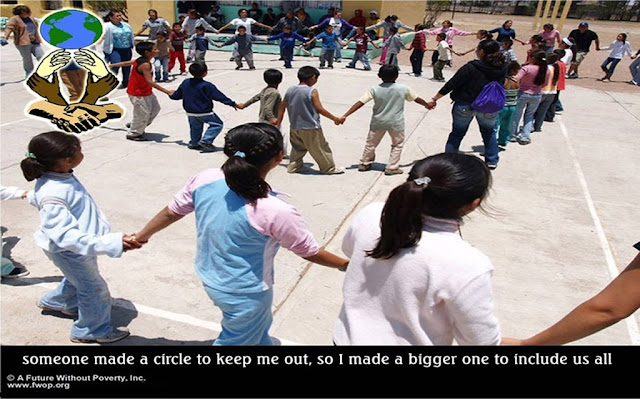 My husband Andrés L. Pacheco and I have been working with refugee populations at our southern border for the past few years, and we presented some of our findings during one of these excellent sessions. I am hoping to be able to post more in the future, but at least — for now — I can present my own, “The Chronic 'Refugee Problem' Under USA's Rug: Migration Along Our Southern Border." Andrés informally spoke about our process — what it is we do from beginning to end with the people we come into contact with — while I had a more formal, even if short, talk prepared.

We began to work with refugees when we went to the border to help out in McAllen, Texas, along with people from the entire city and beyond in the state and country, as well as interdenominational organizations who put aside their politics because what we were suffering at the border was a humanitarian crisis.


Read more »
Posted by Ana M. Fores Tamayo/Adjunct Justice at 10:02 AM No comments:

I was looking through my old May Day activities, and I came across this letter I had written to my petition followers two years ago, in 2014. Back then I had a little over 4000 signatures, yet today we have 10,141.

Has that made any difference? Unfortunately, no.

We must not give up. We must keep fighting, struggling to make a difference, a change for the better.